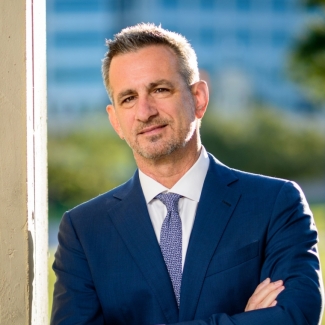 Neil Giuliano serves as President/CEO of Greater Phoenix Leadership (GPL), which for forty-five years has been the forum for CEO leaders to collaborate with the government, education, and philanthropy sectors to create and sustain a safe, healthy and prosperous community. Mr. Giuliano joined GPL in late 2015 and has expanded member engagement on significant community issues, including the creation of a racial equity advancement project for Arizona’s CEO leadership.

From 2010-2015, Mr. Giuliano was President & CEO of San Francisco AIDS Foundation (SFAF), one of the largest AIDS service organizations in the world and led the transition effort from a sickness and disease management model of care to one incorporating health and wellness for patients. Prior to his work in San Francisco, Giuliano was bi-coastal (NYC & LA) as President/CEO of the Gay & Lesbian Alliance Against Defamation (GLAAD) and executive producer of GLAAD Media Awards from 2005-2009. At GLAAD, the third largest LGBT advocacy organization in the US.

Before becoming a national activist and NGO executive, Mr. Giuliano was council member, 1990-1994, and then the youngest person ever elected mayor of Tempe, Arizona, a post he held from 1994-2004. The creation of Tempe Town Lake, The Tempe Performing Arts Center and the implementation of the regional light rail system were all advanced under his leadership.

Mr. Giuliano is the author of “The Campaign Within: A Mayor’s Private Journey to Public Leadership” (Magnus Books 2012) and has received numerous awards and honors for his work in public policy and community activism, including the Barry Goldwater Equality Award from Equality Arizona, Tempe Humanitarian of the Year in 2014, 2017 Most Admired Leader Award from the Phoenix Business Journal and in November 2017 was named the 69th Man of the Year by Valley Leadership. He served as a distinguished lecturer at the William J. Clinton School of Public Service at the Clinton Presidential Library.